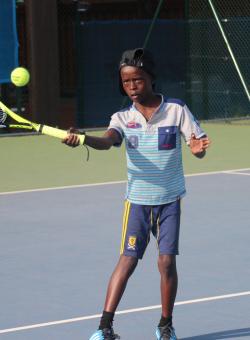 Percy came to SOS Children’s Village as a baby and he’s grown up to be an amazing young man. This year he turns 15 years old and he has been a wonderful upbringing at SOS. He has gone through formal schooling and this year he is doing form 3. Right from early childhood, he has been an excelling child, not only in his academics but in any extracurricular activities. He has topped his friends in playing chess games at the Village. He has also explored swimming, judo and finally he settled to pursue his talent in tennis.

From the first day he entered the tennis courts, Percy never looked back. He enjoyed attending practices at the Gaborone Club together with a few other ‘stars’ from the SOS Tlokweng. Their commitment attracted sponsors and this has since seen them playing tennis at international tennis courts in Sweden and France annually. Asked what he intends to do, he says he will continue working hard at his academics and attend his tennis practices after school and during weekends, for he is aware that a combination of the two will open more international doors for him. Percy acknowledges that it's strenuous, especially that this is his final year of junior school but he believes that hard work does not kill. He believes that as soon as the Covid 19 pandemic is under control he will resume his annual international travels. ‘Practising in Patrick Mouratoglou’s tennis courts in France is an achievement and a motivation, knowing that Serena Williams has used the courts several times, said Percy with a smile.

Donate now and make a difference in a child's life