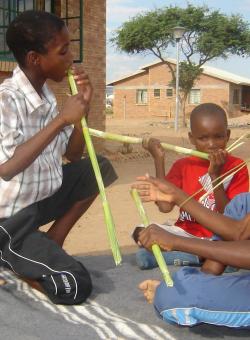 SOS Children’s Villages Serowe is the youngest and most celebrated of the  3 Botswana SOS Villages. This is due to the fact that it was a ‘dare do it project’. Unlike the other SOS Villages, the construction of the SOS Serowe was fully locally funded. Companies like FNB, Barclays, African Alliance, Debswana, Coronations Fund Managers, and more came together and each paid for the construction of an SOS home, making a total of 12 family homes, offices, staff houses, and a kindergarten. This was a multi-million pula project which was done in a space of 3 years, opening its gate to the needy children in 2008. Since the SOS Village is located in a rural area, monetary donations for the upkeep of children in the SOS Village were not much but to the creativity of the staff, they adapted and made meaningful partnerships with the village authorities. They received donations in form of cattle for meat, farm foods such as vegetables, field crops, and one supporter actually gave the SOS Village a field to plough field crops. Harvesting season has always been the fun season as children and their mothers spent a day at the Masimo enjoying the fresh air and eating watermelons, maize and others.

While exploring ways to grow, SOS Botswana used the Serowe SOS Village to pilot the Families integration project. The family integration project is a long-term project done throughout the SOS Federation and its aim is to de-institutionalize SOS Villages. The intention is to plant the SOS families within the communities they exist in. Although SOS Botswana is proud of constructing the Serowe SOS Village with local funding, the family integration project is even more rewarding, so in 2016 two of the SOS families were moved to the Radihemelo ward, about 3 kilometres from the SOS Village. There the families each live autonomously from the rest of the Village. The SOS Mother and her children are empowered to live with the communities they exist in. After reviews and gathering lessons, a further 2 families were moved out of the SOS Village in 2017 and 2019 respectively. This model has proven to yield positive results and over time more families will be moved. Answering a question of what will happen to the SOS house vacated by the families that moved out, the Village manager said the community members will be invited to come and occupy them at a rental payment, and the money is the one that will be used to fund the cost incurred during the integration exercise.

Donate now and make a difference in a child's life